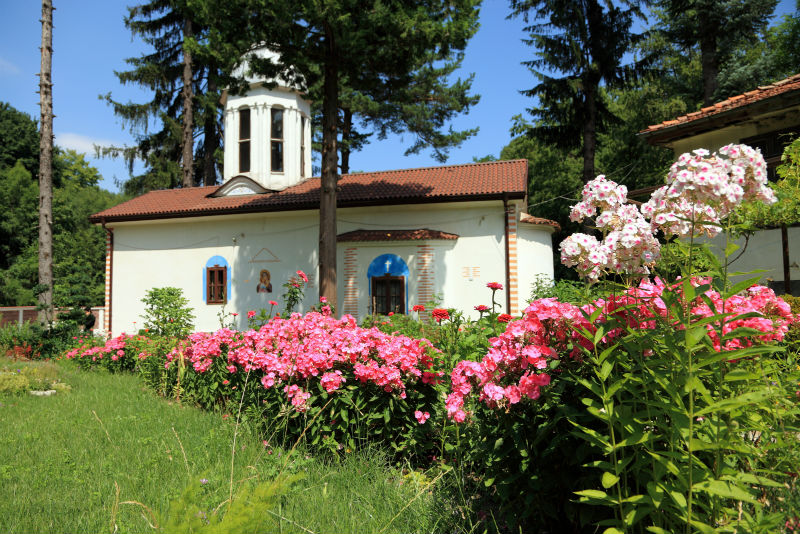 Last Saturday I my wife Svetlana andCvetomir and Dimitrina and their 3 year old boy Boris we went for a small trip to Divotino Monastery – Holy Trinity. This monastery is well know near Sofia by christians because it is one of the monasteries where still one can meet monks with a zeal for spiritual life and a tight monk brotherhood .. 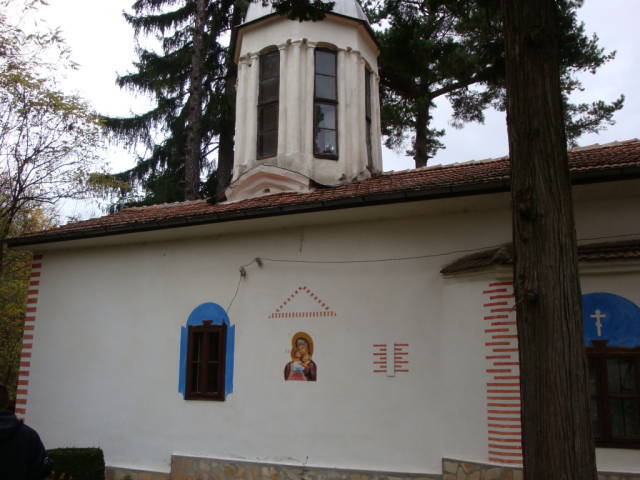 On our way to the monastery the usual way leading to town of Bankya which is going through a small village was closed so we had to drive to a nearest village. Bankya is famous with its Mineral water – the region is very rich in mineral waters natural springs.

Reaching the monastery, we saw two of the monks to hold a bee hive. The monks greeted us but has to continue doing their planned
work with bees. One of the monks even recognized the kid with us Boris (because 1 year ago – Boris received baptism in this monastery). Later I got a bee bite and now 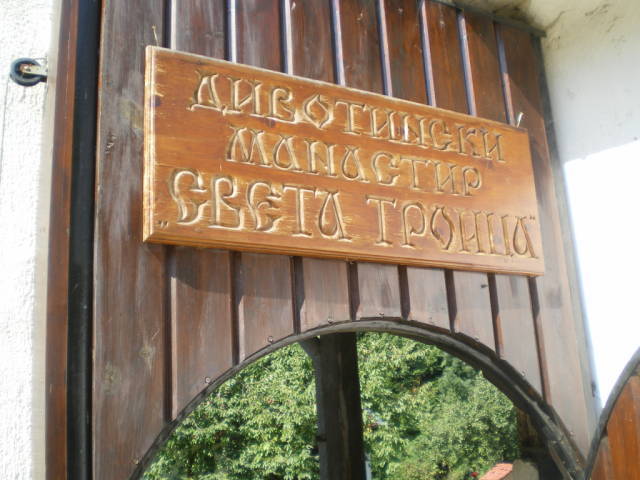 Entering the monastery walls one feels like entering heaven for one can feel the abundant grace of God which is dwelling there.
The small garden nearby the Church looks like a heavenly garden.
We had the chance to have a small talk with one of the monks which I later realized is the “right hand of the Abbot”.
Divotino monastery is one of the few ones in Bulgaria that offers isolation from the world as it is situated in a place away from civilization and thus seems to be great place for people who would like to evaluate their life and their life goals or simply find retreat from modern stressful life. 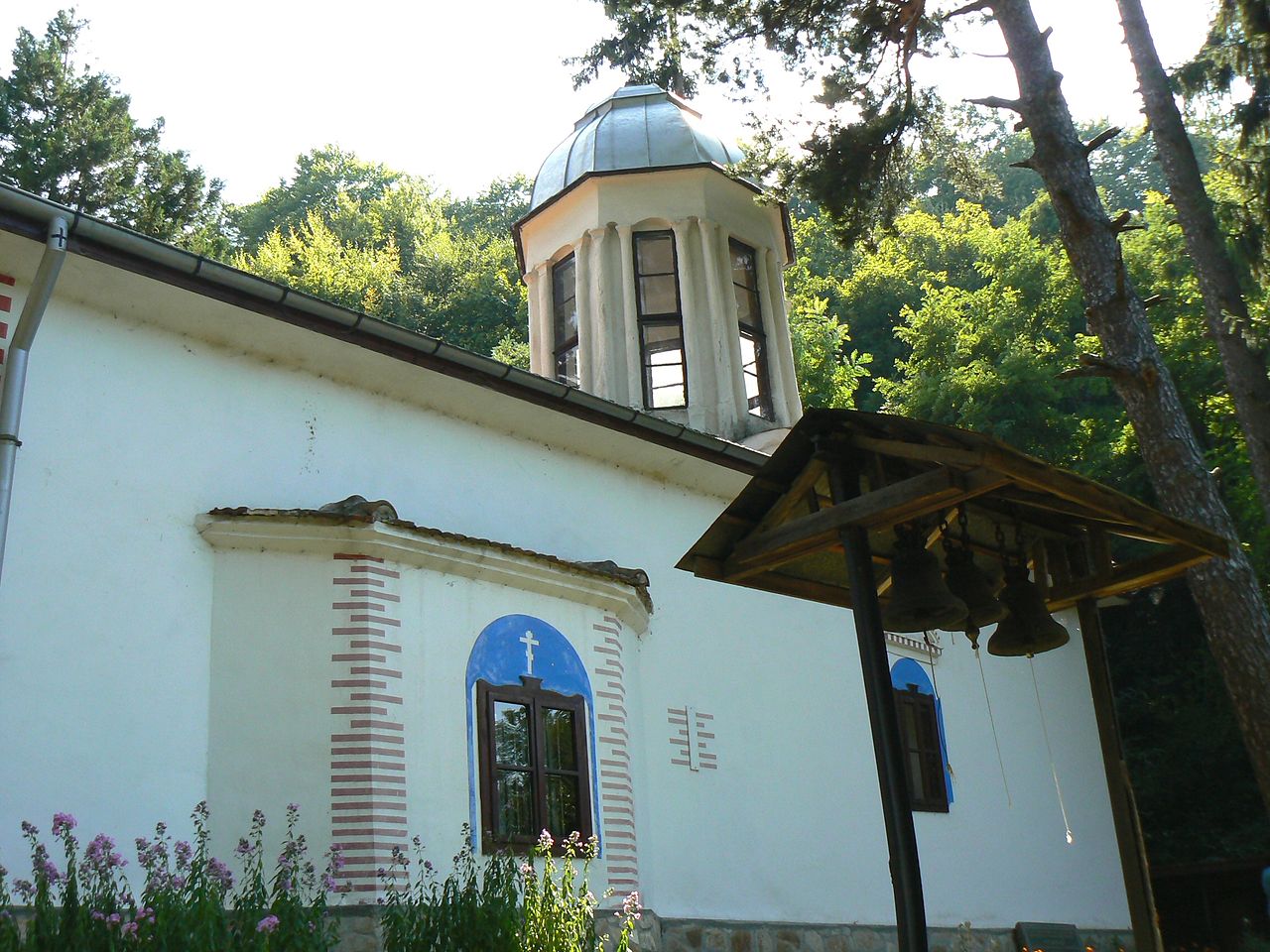 The Divotino monastery “Holy Trinity” is one of the oldest and best-preserved cloisters in the Sofia region. Originally there was a monastery around ъ. 1046 and then monastery was destroyed in 1386 by Turkish just to be rebuilt in y. 1875, among local people it is famous unde name “The King Monastery”, because of the frequent visits of Bulgarian King Ferdinand in time of his rulership. in 20th century it was a non monastery. As much of the monasteries in Bulgaria, the monastery had a “cell school”, which at times has accomodated the Grestest Bulgarian revolutionary (liberation) fighter against turkish slavery Vasil Levsky. 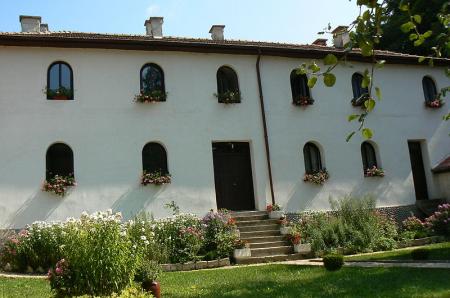 At present, it functions as a monk brotherhood. The monastery lies in the northern slopes of the Lyulin Mountain, about 10km away from the village of Divotino and 4km to the southwest of the Michailovo quarter of the town of Bankya. Divotino Monastery is only 24 km by car from Sofia.
The place is exceptionally picturesque and wild, while the monastery is surrounded by wooded hills and two brooks that cross by its walls.

The area where the pot was found is still known as “The Fortune”. Not much has remained of the old monastery, however, save for small wooden part of the iconostasis and three wall-painted icons. During the plunders of the so-called bands of Kurdzhalii towards the end of 1806, the monastery was not saved and its herds of sheep, cows, horses and buffaloes were stolen. According to a legend, however, the chief of the Kurzhalii, Hassan Hodzha, who led the stolen cattle, was killed by a thunder. His scared men buried him and ran away, leaving behind the plundered animals. The place, where Hassan Hodzha was buried according to the legend is still known as “Hodzha’s Grave”. 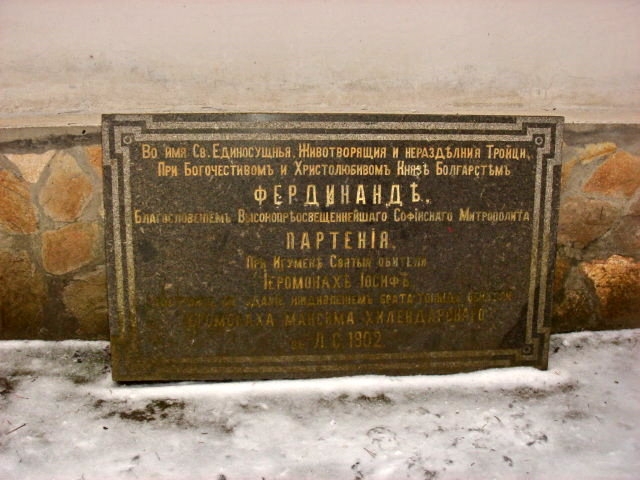 The monastery is popularly known among local people as the Tsar’s Monastery, because of the frequent visits of Tsar Ferdinand there during his rule. It is also told that Tsar Ferdinand donated two carriages to the then-Mother Superior of the Divotino monastery, Claudia. One of the carriages was used for representative purposes, while the other one served for overseeing the vast real estate properties of the monastery. Similarly to many other monasteries, the Divotino cloister also maintained a small monastery school and supported the national struggle for liberation, including by sheltering the famous revolutionary Vasil Levski. 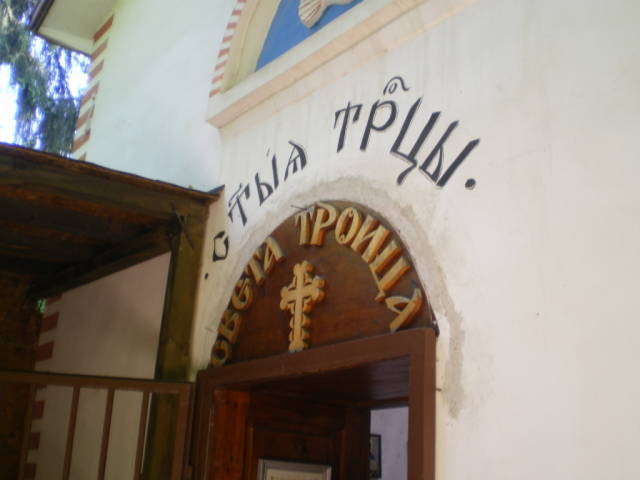 The Monastery icon has saved Vasil Levski from a bullet.
In Monastery there are two miracle making icons. One is with a hole of a Turkish bullet. The bullet was shot against Levski, when he was hiding from Turkish authorities. The bullet ricocheted and killed the Turkish. The other miraculous icon is of the Most Holy Trinity.

The present-day church and monastery buildings were built in 1902, after the complex had been set on fire for three times in a row during the Ottoman rule of Bulgaria. The church was constructed after the Athos architectural style, and represents a small, one-nave, cross-shaped building. The yard of the monastery is not large, but is rather hospitable with its beautiful fountain, several fruit trees, a wooden table with benches ands a shadowed shelter just in front of the church. 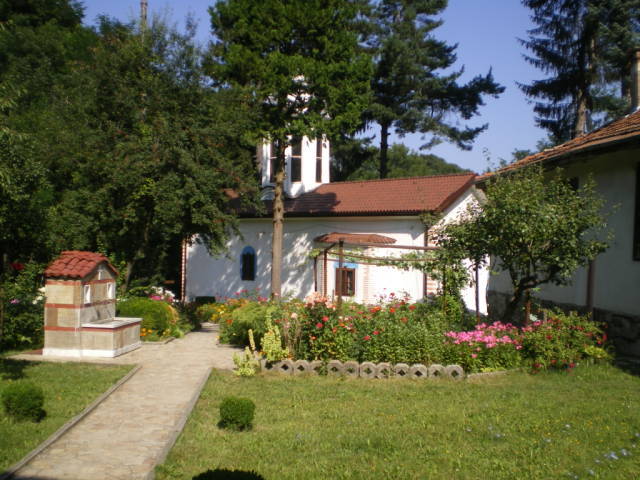 The church’s feast is marked every year on the 50th day after Easter. On that day, the monks throw walnut leaves out of the altar’s gates towards the worshipers, as the leaves remind of the tongues of flame, which embodied the Holy Spirit during his appearance before Christ’s apostles 50 days after Resurrection.

Here is a video to a small documentary about the monastery – http://vbox7.com/play:3cea590f